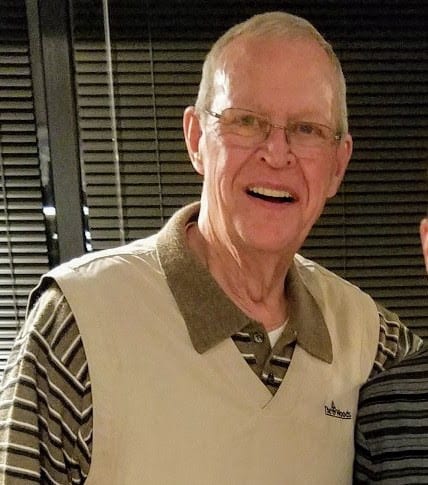 Knee, Jack L., 80, Johnstown, passed away August 28, 2019 at Windber Hospice. Born July 13, 1939 in Johnstown, to the late George and Carolyn (Dietz) Knee. Preceded in death by brother, Robert. Survived by wife of 59 years, Patricia A. (Curry); daughter, Jacqueline Sharkey (David); grandchildren, Nicole Rowe; Zachery Sharkey, all of Oklahoma; sister, Geraldine Rummel; brother, Russell; brother-in-law, Herschel Booth, all of Johnstown; and numerous nieces, nephews, great nieces and nephews, and great-great nieces and nephews. Jack enlisted in the Navy after graduation from Dale High School in 1957. He served aboard the submarine, the USS Threadfin. He received his Engineering in Training certificate from the University of Pittsburg and his Professional Engineering license from the Pennsylvania State University. Jack was employed by H F Lenz in Johnstown, then hired by Penn State University where he retired in 1999. Jack loved to hunt at his cabin in the mountains and enjoyed golfing at many golf courses, especially Berkley Hills. He was a member of the GTE and PNA golf leagues, Ferndale United Methodist Church, and a life member of the Alpha Fire Company in State College and the Elks. He was also a member of the VFW, American Legion, Harmony Club, Moxham PNA, and the Union Social Club. Jack will be greatly missed by his family and many friends. Jack’s family wants to sincerely thank Dr. Atkinson at Allegheny General Hospital, Dr. Awan and staff at UPMC Cancer Center, the Emergency Department at Conemaugh Memorial Home Health Services, and Windber Hospice for the care he received over the years. At Jack’s request there will be no viewing. A private memorial will be held for the family. Memorial contributions may be made to Ferndale UM Church, 701 Vickroy Ave. Johnstown 15905 or Windber Hospice. Arrangements in care of Simple Alternatives, Inc., Affordable Cremation & Sensible Funeral Care. Condolences may be made at SimpleAlternativeCares.com